How to cut small circles from felt – 5 Easy Methods I was working on an up-coming project and needed to cut out a whole load of felt circles to make eyes. This can get fiddly, so I thought I’d share my favorite method for cutting tiny circles like this. It works for circles around 1/2 inch or less – anything larger and you can use this as a starting point, but you’ll need smooth off the edges more.

This will work for any fabric, but in practice you’ll want something that doesn’t fray. Felt works particularly well as the edges are slightly fuzzy which helps round off any sharp angles.

To make pairs of eyes, like here, the important thing is to try to get a pair of similar size, rather than matching the exact size of a template. So start by cutting two squares the same size, and then work from there. The best way to get them similar sizes is start with a strip as in the first photo above. If you end up with a pair are very mismatched, it’s usually easier to cut another circle rather than try to trim one down – try for one the size of the larger.

I usually make a few more than I need and then pick the best ones. Out of these three, the first two are most similar:

Here’s a sneak peek at what I’m working on – lots of felt eyes coming up! 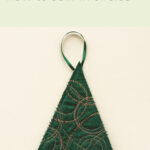 Serger Vs. Coverstitch – Which One Is The Best?

Understanding the differences between a serger and a coverstitch machine could be one of the first challenges you face if you are new to sewing. Many people have the notion that these two…